Mattress Mould Complete Guide: Everything You Need to Know 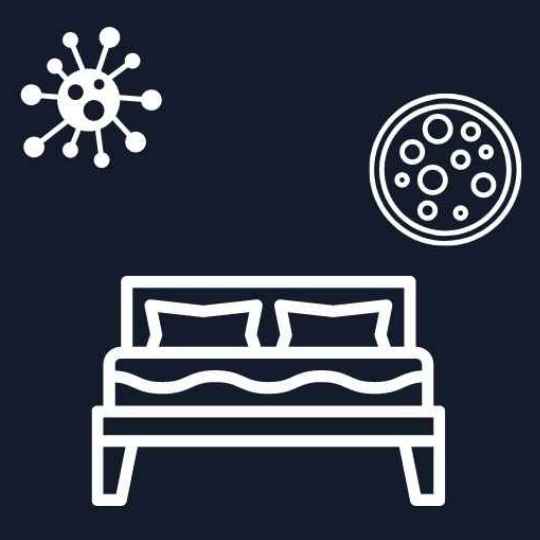 What Exactly Is Mattress Mold Anyway?

Mould is a kind of fungus commonly found in houses and grows in moist and dark environments. Mildew is another fungus that you should be aware of because it is often confused with mould. In the case of mattresses, mould is far more common to be found on beds that other moulds, the most refer to it as mould as we don’t understand the difference between the two.

Mildew is a specific type of mould that grows flat, which means it remains only on the surface of your mattress, which makes it easy to remove. Unfortunately, moulds, on the other hand, grow deep into mattress services is difficult to remove. If you have mould on your mattress, this will require much more severe treatments to remove it.

How Do I Know if Mold Is on My Mattress? 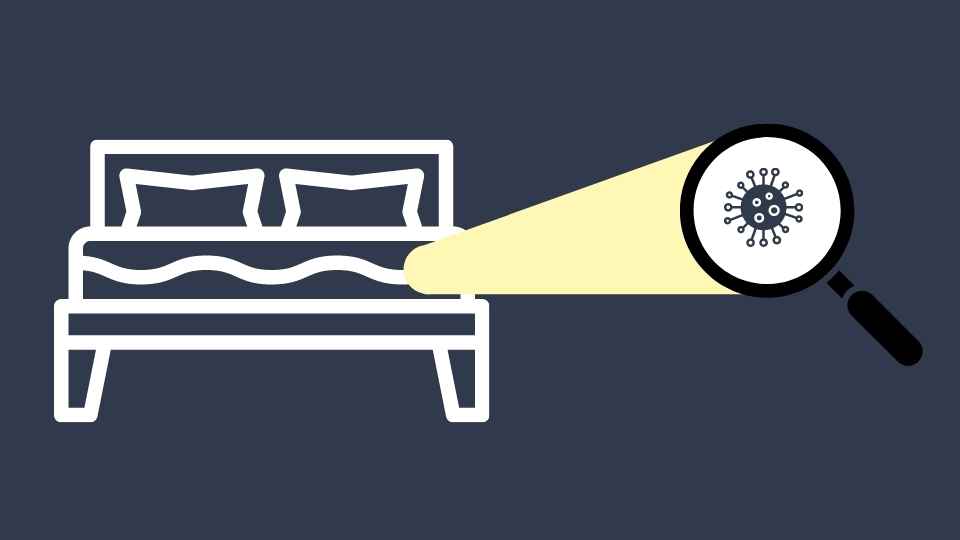 One of the early signs you should be looking for to identify early signs of mould is tiny black spots that might appear along the mattress’s sides. Typically you will find the spots on the mattress’s underside, which tends to touch the ground, bed slats or box spring. Typically this type of black mould is mildew; however, if this mould is left untreated, it can progress and cover the entire mattress. This can damage the bed while also releasing spores which could have an impact on your physical health.

When mould grows, it appears as large fuzzy segments, which are usually white or black. You can tell if the mould is just mildew from its white and black appearance, which is unique to this fungus type. If you find mildew on the bottom of your mattress, you should be easily able to wipe it off with a wet cloth. Luckily you can remove mildew from the surface of a bed without much effort or pressure, but other Moulds tends to be much more stubborn and requires further treatment.  We address a few tips for removing mould later in the article.

Moulds On Popular types of Mattresses. 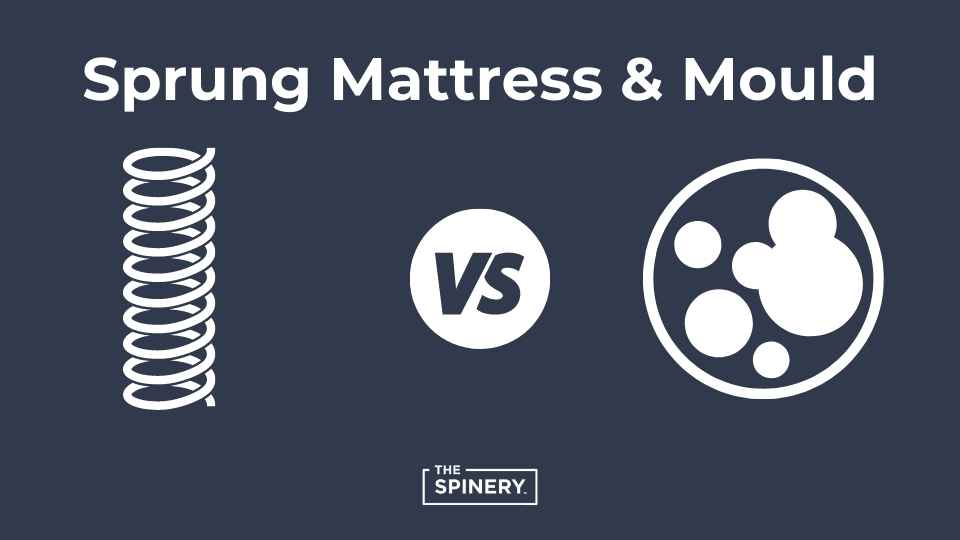 Mould can grow on and inside sprung mattresses. If there is a warm environment underneath or in the bed where there is no light and moisture begins to settle, the fungus can eventually spread and spread.

To prevent mould growth in spring mattresses, it’s essential to raise the bed from the ground as much as possible to allow better air circulation. To reduce moisture, you can also use a dehumidifier and open the windows occasionally to create a flow of air throughout the home, helping dry it out. 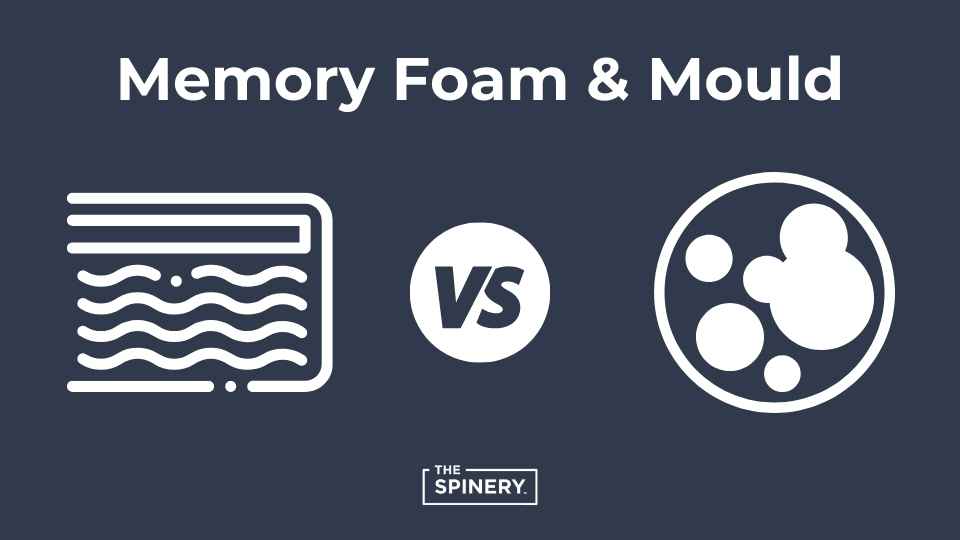 Memory foam mattresses are made using many different foams. The problem with many foams is that they absorb moisture and holds it, meaning that mattresses can collect the sweat and liquid from your body over time. This moisture can get to the bottom of the bed where it can cause mould growth.

Some people believe memory foam mattresses are arguably more susceptible to mould than spring mattresses because memory foam lays flat against the ground and holds more moisture. These two factors mean that there is less airflow and more moisture, both of which encourage fungus growth.

If there are visible signs of mould on your bed, you will need to act quickly and take steps to mitigate the problem as soon as possible. It will be hard work but must be done to prevent future recurrence

Natural latex is naturally resistant to mould, as it does not provide a suitable surface for them to thrive. The antifungal and antibacterial qualities of latex foam are essential factors for a healthy sleep environment. Tests conducted by the reputed Morton Thiokol/Ventron laboratory in Massachusetts, USA in the late eighties led to the conclusion that bacteria and fungi brought in the vicinity of latex foam die off. Latex mattresses are also known to be good for sleep since they promote proper spinal alignment.

Mould Mattress and Health. Is Mould on a Mattress Dangerous?

Moe’s can potentially be hazardous for your health. Moulds produce allergens, irritants and in some cases, toxic substances. For some individuals, inhaling or touching moulds Mold can cause allergic reactions. Some other common responses to mould include sneezing, a runny nose, skin rashes, and irritated eyes. Mould exposure can irritate the eyes, skin, nose, throat and lungs of individuals regardless of whether you are allergic to mould. Mould can also be a concern for people as it might exacerbate the condition. There’s also some research to indicate that mould exposure has long-term Health consequences and the research on mould and health are ongoing.

Step-by-Step Guide for Removing Mold From Your Mattress

Most commonly grows on the bottom of your bed, it is still possible in other places. The primary reason why most people find under their bed is that there is practically no light exposure and minimal air circulation. The top and sides of your bed are allowed to breathe and get exposed to light(sunlight and artificial light) which typically prevents mould growth and receiving air every time; you lift your bedsheets.

Mould on the other side, you should try to make a conscious effort to increase the airflow under the mattress and bed. You can do this by opening your room’s windows periodically and using a dehumidifier in your bedroom.

It’s also good to regularly lift your mattress to check for early signs of mould and see if you can detect any smells.

You can also leave your mattress leaning against the wall until the bed dries, reducing the risk of fungus developing by keeping good airflow on the underside of the mattress. Air needs to circulate properly on both sides of the bed to help prevent mould, – not just one side

If your mattress already developed mould, a mattress protector will not help and could make the problem much worse. A mattress protector will trap moisture and create an environment in which mould can grow. Additionally, if you cover your mattress to prevent mould growth, if there is moisture in your bed before applying the protector, this could trap moisture and cause mould. Your best option to prevent mould growth is to keep your mattress as dry as possible by routinely airing out your bed and following the next section’s steps.

If conditions are conducive to mould growth, it can be challenging to stop mould from taking hold of your mattress and other parts of your home.

A long term solution might be to purchase a latex mattress and slatted bed base. Latex foam mattresses are naturally mould and bacteria resistant as well as being very comfortable. They are also frequently recommended by chiropractors and physiotherapists. A natural latex mattress is a way you can guarantee you won’t have to deal with mould on your bed again. 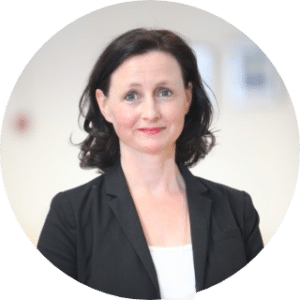 My goal is to create 100% natural  mattresses and pillows with extraordinary comfort.

With 30 years of spinal healthcare experience, I learned that many peoples problems are avoidable with expert design. 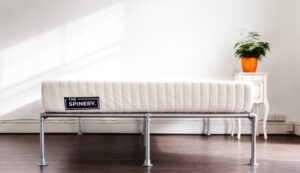